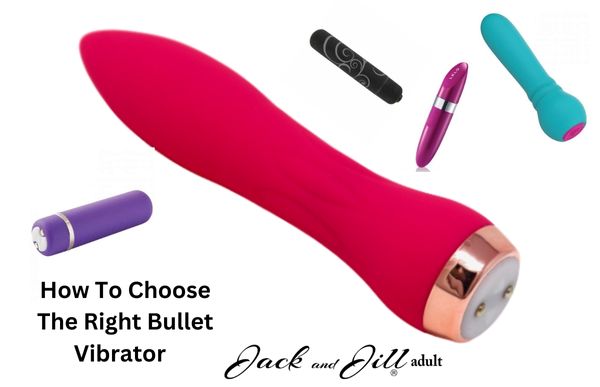 Orgasms are so beneficial to our bodies that frequently having them is practically a form of self-care. Reaching an orgasm makes our brains release feel-good chemicals which make us happier, less stressed, and less anxious. Orgasms increase blood flow and lower blood pressure. So, it’s no wonder that we’re all taking our orgasms seriously.

However, although the destination (the city of Big O) is what matters most, we should also be mindful of the journey. How you get where you’re going is also important, so picking the best sex toy for you is vital.

Let’s unpack this, shall we?

The beauty of bullet vibrators is that, although small, they are mighty. Depending on which bullet vibe you pick, you’ll have various features at your disposal.

But it can also get a bit overwhelming. Making the optimal choice is not an easy task. Sure, you want a body-safe material, but which one should you go for? Furthermore, which features do you pick? Do you choose the vibe that offers precise stimulation of the clitoris or the waterproof remote control bullet?

The options might seem endless, but there is a way to narrow down your choices.

The sex toy industry is one of the fastest-growing ones on the planet. Research shows that, by the year 2026, the sex toy market will be worth 52.7 billion dollars. With the stigma surrounding sex toys slowly lessening and people becoming more willing to experiment, sex toys are no longer something we buy our friends as a gag gift. Instead, they are a staple sex aid in almost every other home in America.

There’s no such thing as a universal toy that fits everyone’s needs. Therefore, picking a sex toy comes down to your preferences. However, bullet vibes have a massive advantage over other sex toys because they are discreet and small.

That means they offer superb clitoral stimulation. Any sex educator will tell you that the clitoris plays a vital role in female orgasms. The Kinsey Institute research shows that women orgasm during intercourse between 30 and 40% of the time. However, that number dramatically increases when direct clitoral stimulation is involved (50-60%).

It’s Compact but Packs a Punch

By definition, bullet vibes are smaller than regular vibrators. However, that doesn’t mean they are less powerful. The best bullet vibrators like Jill’s Lil’ Bullet or the Je Joue Mimi Soft offer intense stimulation and various vibration settings. Between different speeds and patterns, one bullet vibe can offer dozens of vibration combinations that will blow your mind.

When it comes to picking a vibrating bullet that will do more than pulsate, you can opt for those that also:

There are a few features that most bullet vibrators have, such as vibration and compact size. In other words, no matter which bullet you opt for, it will be small (only a couple of inches long), and it will vibrate. But which vibration settings do you want? Do you want an angled tip or a pointed tip? Are seven vibration patterns enough, or do you want more?

These are just some of the questions you should ask yourself before clicking on that “add to cart” button. If you’re overwhelmed, don’t worry; we’re here to help.

So, What Are My Options?

The best bullet vibrators are the ones that are made from a body-safe material and have an outstanding balance of features and usability. Unfortunately, that balance isn’t that easy to achieve. It would be best to look for a bullet that offers enough features to make your me-time pleasurable and fun without overwhelming you.

For example, the rose gold Le Wand Double Vibe has 15 vibration modes and six intensity levels. For such a compact vibe, that’s a lot of vibration patterns. Add the general, bunny-eared shape of the toy (that makes it a clit cuddler), and you have yourself a perfect toy!

However, clicking through all the combinations you have at your disposal (as fun as it is) might be difficult (because you have to list them all to find the ones that work for you). So, Le Wand Double Vibe might not be everyone’s first pick.

That’s precisely why research is vital. You have to know what the toy offers to see if it will be helpful for you or not. So, let’s see which options you have before you.

That might make you think they are outdated. In reality, it means battery-operated vibes have been perfected. They have a longer battery life than ever before. One set of batteries can give you one or two hours of playtime.

Luxury toys such as the Je Joue and We-Vibe bullets usually use a USB charging option. However, that doesn’t mean that battery-operated toys are “less-than.”

There are plenty of benefits to battery-operated toys. As mentioned before, you don’t have to worry about whether you’ve brought a cable with you or not. You can just buy a new set of batteries and go to town (on yourself).

As mentioned before, all bullet vibrators have the vibrating feature. The levels of intensity and vibration patterns available vary between different types and brands.

For example, some toys will have three vibration speeds and seven pulsation patterns, while others will have a more extensive selection of vibration modes and patterns.

Usually, bullet vibrators have one motor that makes the toy vibrate. The Maude Vibe and some other exclusive toys (like the Je Joue and We-Vibe luxury items) have motors that control the very tip of the toy and make it rotate or flutter.

Those particular features offer a different type of sensation. For example, the flutter feature that the Maude Vibe offers simulates the “come-hit-er” motion that some women adore, while the rotating feature some other sex toys have provides the circular stimulation that many women find necessary for orgasms.

It looks like it belongs in your makeup kit, which means that even if someone does dare to snoop through your things, they’ll never know that you have a naughty addition in your bag.

An extra discreet bullet vibe also makes for a great gift. In addition, they are tasteful and elegant. What more could a woman want?

The only downside of this excellent bullet vibe is that it is so realistic that you might pull it out by mistake when trying to fix your makeup. But don’t worry; no one will know what you do with it when alone!

As mentioned, the type is only one factor that you should consider. When it comes to finding the best bullet vibrators on the market, you have to consider every toy feature. That includes the following:

Finding the best bullet vibrators is no easy task, so here’s a quick buying guide that you can consult while doing your research.

The material is the most important factor you need to consider while looking for your new toy. The best bullet vibrators will always be body-safe. They will be made out of phthalate-free silicone or other body-safe materials such as TPE, glass, or metal.

There are also plastic and jelly vibrating bullets on the market. However, those materials aren’t as body-safe as silicone is. Like Jack and Jill, We-Vibe, Lovehoney, Je Joue, and others, the biggest brands out there use medical-grade silicone for their toys because it’s the safest option.

Aside from vibration combos, you should also check out additional features the toy might have. For example, does it pulsate at the tip, has a fluttering or a suction feature, is it insertable, etc.?

We’ve already gone over the different control options when it comes to bullet vibrators. Depending on what type of toy you need, you can opt for regular or remote control toys. The latter is an excellent option for those who plan to use the toy with a partner.

The best thing about bullet vibrators is that they are versatile. They don’t necessarily have to look like bullets. These toys come in various shapes. Why? Because different forms provide different sensations.

Alternatively, some bullet vibrators are clit cuddlers, which means they have two prongs (or rabbit ears, if you prefer) that go around the clitoris and provide stimulation from all sides.

So, there’s something for everyone, so you have to figure out which type of sensations and stimulation you prefer and then pick the right shape for yourself.

On the other hand, just because a toy is expensive doesn’t mean it’s also high-quality. What’s more, a costly toy might not have what you’re looking for. So, don’t let the price be the determining factor.

However, just like with the price, the brand shouldn’t be the only factor you consider. Some brands might seem high-quality, but in reality, they just have a good marketing department that makes their toys seem like excellent choices.

It’s best to do some research on your own, even if the brand is well-known. Nothing speaks more highly of a brand than five-star reviews from happy customers, so keep an eye out for that.

Anything Else to Consider?

Yes! You’ve probably narrowed down your search to a couple of options by now. That’s great, but you still have a long way to go before finding the ”one bullet to rule them all.”

First of all, you should decide whether you need more than one point of stimulation. You can move along merrily if you’re happy with just the one. But if you’re looking for more than one, consider whether the dual (or triple) bullet you picked is worth your time (and money).

For example, figure out whether the two different bullets provide different sensations and if so, does that work for you? Ideally, the two or three bullets will be the same size and offer the same features (and vibration intensities). However, it’s also good if you have more options to choose from simply because you might not want the same sensations (or the same intensity of stimulation) in various erogenous zones.

If this seems more complicated, you can just pick a couple of different single bullet vibrators and call it a day.

Remote-controlled bullets are great toys, but not all offer the same features. Some work via Bluetooth and provide short-range control, while others allow you to connect them to a wireless remote.

The latter also offers the option of long-distance lovemaking. This is a great feature for couples in long-distance relationships. Wireless remote toys usually connect via an app that one or more people can control.